The Great CASA Telethon of 2018 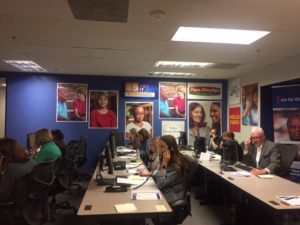 2018 started off with a “BANG!” for the CASA Program throughout Arizona. January was host to the CASA of Arizona Telethon—a statewide recruitment effort on January 23rd that caught the attention of thousands of viewers throughout the day and evening on AZFamily. CASA volunteers were quick to answer phones to speak to Arizona residents calling in from nearly every county throughout the state!  Two CASA volunteers share about the fun and frenzied experience in the Channel 5 Media Room!

“I have had many people approach me in the last week who saw me on TV and want to know more. So the telethon is still paying dividends.  People from my gym and people I used to work with!! My gym friends and/or acquaintance wanted to know how I heard about CASA and why did I chose CASA.  I told them I had a former colleague who was a CASA, I had a former colleague who was a foster parent who eventually adopted his foster son and in former life (I was in federal law enforcement), I saw how having an advocate, a voice, a chance could make the difference.  I spent 26 years as a public servant and I wanted and needed to continue that service in my retired volunteer life.” ~ Suzanne Solomon

“Out of the many phone calls, one really stood out for me. A woman called in and said she was interested in becoming a CASA.  She said she would include her husband in one of our information events as she thought he would consider being one too. The caller said they were both retired and more flexible in their time. She said she was ‘personally moved by the telethon because when she was five, she was a foster child and was adopted’.  Telling me, she sounded like she was choking on tears.  “Wow, what personal life experience she would bring as a CASA.” ~ Carolyn Blaney-Arndt

Help a child in need. Become a CASA advocate, today.